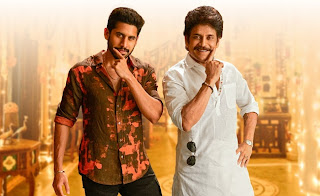 All eyes on Bangarraju, which is the only major film to be released on this Sankranthi. The sequel to the box office hit Soggade Chinni Nayana features Nagarjuna and Naga Chaitanya as Bangarraju and China Bangarraju.

This Kalyan Krishna director’s theatrical trailer is out now and it looks quite colorful and glamorous.

The Bangarraju trailer begins with Nagarjuna in panchekattu playing kabaddi with Apsarasas in the sky.

Naga Chaitanya also performs in style, as the village girls follow his bicycle to the carnival at the temple.

China Bangarraju is no less than the real Bangarraju, in terms of flirting with girls and leaves no place, including the temple, to woo them.

Ramya Krishna joins Nag in heaven. While Bangarraju enjoys the actions of his grandson, Ramya Krishna hates him.

Krithi Shetty looks like a perfect town belle with a lot of innocence, although she feels like the most talented.

The second half of the trailer is very emotional and is mixed with supernatural elements.

It is clearly evident that Nag and Chay played the role of Bangarraju in their own style and both gave energetic performances.

Yuvraj makes the visuals look vibrant, while Anup Rubens adds sparkle to the video with her upbeat background music. The visual effects in the later parts are substantial.

It seems that Kalyan Krishna has done his job expertly, as Bangarraju looks like an ideal festival entertainer with all the elements thrown in.

Read More  These Artists Are Known All Over the World... Except in The USA