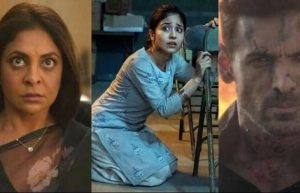 New Indian Web Series & Movies
The increase in COVID-19 cases in India means being more cautious than ever. While staying home is a priority for everyone, entertainment doesn’t have to take a backseat, thanks to some great web series and movies hitting our screens. With that in mind, we selected a list of the best shows and movies to watch in January 2022. Take a look!

See Also – Prithviraj to Radhe Shyam, These 10 Movies and Web Series Will Entertain in January

Set in the fictional city of Onkara, the series revolves around Vikrant (Tahir Bhasin), who loves Shikha (Shweta Tripathi) but must play a dangerous game to escape the affection of Purva (Anchal Singh), a woman of a family. of obsessed gangsters. with the. With a stellar cast, the web series promises a mix of crime, drama and suspense that will keep you on your toes.

The show was created by Mahesh Bhatt and features Tahir Raj Bhasin, Amrita Puri, and Amala Paul in the lead roles. Following the trailer, the upcoming web series tells the story of a filmmaker who wants to make a mark with his work and ends up having an extramarital affair with a superstar in the process. Set in 70s Bollywood, expect retro looks, references, and more.

Shefali Shah and Kirti Kulhari play the doctors in this suspenseful drama in which a medical trial of a new drug goes awry, exposing the dangers behind human testing. Amid the chaos that ensues with people falling seriously ill, one must decide where he stands when it comes to good and evil.

Starring Naseeruddin Shah, Soha Ali Khan, Lara Dutta, Kritika Kamra, Raghubir Yadav, and others, this lighthearted web series tells the story of a dysfunctional royal family and its separate members. As circumstances lead to strange characters reuniting in their ancestral home, competing natures and ego crashes lead to events that make for a fun watch.

John Abraham is back with another action-packed movie, and from the looks of it, this one revolves around a rescue mission in which he seeks revenge. Also starring Jacqueline Fernandez and Rakul Preet Singh, the next film is set to hit theaters this month, though the spike in COVID-19 cases could also result in an OTT release.

Looking for the next anthology you can dive into? Putham Pudhu Kaalai Vidiyaadhaa hits all the correct notes. The five-episode Tamil anthology tells stories about friendship, love and connection that are put to the test during the pandemic, making it an identifiable watch for viewers.

Starring Ajith Kumar and Huma Qureshi, the film will be released in Tamil, Telugu and Hindi. With plenty of action and adrenaline, the Boney Kapoor-produced film features car chases, fights and fast-paced sequences – everything fans of the genre are looking for. Although it will initially be released in theaters, it remains to be seen if the creators will decide on an OTT release.