Prime Video has a lot to offer in the science fiction realm; hopefully this guide will help you sift through your back catalog. Scroll down to see our top picks for sci-fi movies on Prime Video that you can stream right now. 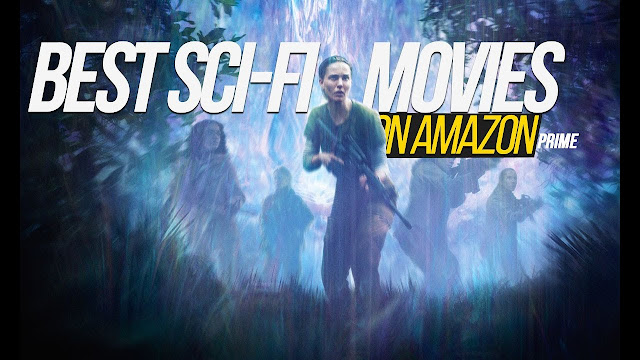 An ’80s techno-thriller starring Matthew Broderick, WarGames won high praise for its inventive concept, along with the teen drama. A young hacker inadvertently gains access to an American military supercomputer, one that can wage nuclear war with the Soviet Union. Whoops! Well executed with entertaining results, WarGames is a smart sci-fi flick for everyone.

In the mood for sci-fi comedy? Galaxy Quest is a cult classic, a loving parody of Star Trek. The Clever Premise: The cast of a cult sci-fi TV series finds themselves embroiled in an actual interstellar conflict. Real aliens are involved, who believe the series is a documentary. A heartwarming comedy with an all-star cast including Alan Rickman and Sigourney Weaver.

This classic sci-fi movie hails from John Woo, a Hong Kong director behind many notable action movies, including A Better Tomorrow (1986), The Killer (1989), Hard Boiled (1992). Basically, if you haven’t seen Face/Off yet, you should know that it has 82 on Metacritic for good reason. In addition, it stars John Travolta and Nicolas Cage.

It’s hard to leave The Tomorrow War off this list, because it’s Prime Video’s big sci-fi movie starring Chris Pratt. It follows a school teacher who is recruited into a war with aliens, in the future. An easy to digest movie that you can watch while looking at your phone.

The second Star Trek movie in the rebooted franchise beams up a terrific adventure with a memorable villain in Benedict Cumberbatch’s Khan. The gang on the USS Enterprise travels to the forbidden zone in space to rescue an endangered species. While a little dated — a gratuitous underwear scene and a change in ethnicity for Khan — Into Darkness is a rollicking trip.

Before Dune, Denis Villeneuve directed another immense science fiction classic. Arrival stars Amy Adams as a linguist who suffers from a personal tragedy in the past. When a mysterious alien spaceship hovers over Earth, she is enlisted to make contact, with completely unexpected, life-changing results. Arrival is a complete package, with performances, cinematography, and writing that are… out of this world.

Not much needs to be said about the first in the Terminator franchise. Seemingly born from a fever dream, James Cameron’s story features a murderous cyborg sent from the future to kill Sarah Connor, whose unborn child is destined to save humanity from the robotic apocalypse.

Just watched Prey and looking for another sci-fi flick starring a heroic pup? Love and Monsters lives up to its name, centering on Joel (Dylan O’Brien), a survivor in a post-apocalyptic world where mutated monsters roam the Earth. In his search for his ex-girlfriend Aimee (Jessica Henwick), he comes across a stray dog named “Boy”. This is when the real romance begins. Catch this enjoyable apocalyptic monster adventure, which will surprise you with some surprises and hit all the right emotional beats.

Beyond the Infinite Two Minutes (2020)

How cool and intriguing is that title? Beyond the Infinite Two Minutes is a low-budget time-travel comedy from Japanese filmmaker Junta Yamaguchi. The Wild Premise: A cafe worker discovers that his TV can show him what’s happening 2 minutes in the future. Obviously, there’s a lot more to it than that, and the results are as creative and mind-blowing as can be expected under the constraints of independent filmmaking. a gem

Intriguing premise? Check. Low budget? Check. Turn at the end? Check. This indie sci-fi mystery from Travis Milloy solidifies its place in Google’s search for “best indie sci-fi gems.” The complex story of Infinity Chamber centers on a man being held in an automated detention center. He must fight superior technology to escape, an immensely complicated feat.

ce doesn’t need an Avatar-sized budget to create a compelling story. The low-budget indie film follows friends at a dinner party who begin to notice strange happenings after a comet passes by. All the more unsettling due to its grounded setting, Coherence nails the rundown of the true indie gem.

For a well-made, thoughtful sci-fi that makes sure not to let its meditations overtake entertainment value, Archive is a great shout. The British directorial debut from Gavin Rothery stars Theo James as a scientist working on making an AI as human as possible. His reasons are hidden, personal and sure to put a spanner in the works. Drawing comparisons to Ex Machina, Archive is assured storytelling with an astute focus on character.

For those missing out on Black Mirror, this will help fill that void. Black Box follows a father trying to rebuild his life after a car accident. He agrees to an experimental procedure that takes him into the darkest corners of his mind.

This little-known sci-fi thriller takes science seriously and uses a found footage format to heighten realism. Europa Report tells the fictional story of a crew’s mission to Europa, a moon of Jupiter. Despite facing one crisis after another, the crew continues to be immersed in the mysteries of their destiny, including signs of life. Prepare to be sucked into a suspense vacuum, made all the more poignant by Europa Report’s concern for verisimilitude.

Vivarium is interesting. It may frustrate many viewers with its surreal aspects, but it’s still a compelling film. A young couple gets trapped in a labyrinthine suburban neighborhood of identical houses. While trying to escape, they find themselves taking care of a mysterious baby.

Matt Damon and Emily Blunt star in this entertaining sci-fi romance based on a short story by Philip K. Dick. A US congressman discovers that the events of his life are being controlled by a mysterious organization. With a love interest by his side, he attempts to outsmart and escape his control.