Anniversary, for any couple, is a time when they take a trip down memory lane with their partner. Even if things aren’t perfect, staying together for years is worth a celebration. It is an opportunity to remember how many obstacles you have overcome as a couple and it gives you the strength to keep going.

I understand that life begins to fade with all those responsibilities that come with marriage, but the anniversary can be the perfect time to get away, be it for a weekend or even longer.

Yes! You will have to plan and save some money, but it is worth every penny.

Planning the anniversary ceremony can be tedious, even more so selecting the songs that will go well with the ceremony. Whether it’s 1st or 50th anniversary, I’ve compiled a wedding anniversary song list here, a perfect combination of some of the latest and golden classics, from our very own Bollywood, that should definitely find a place on your playlist. 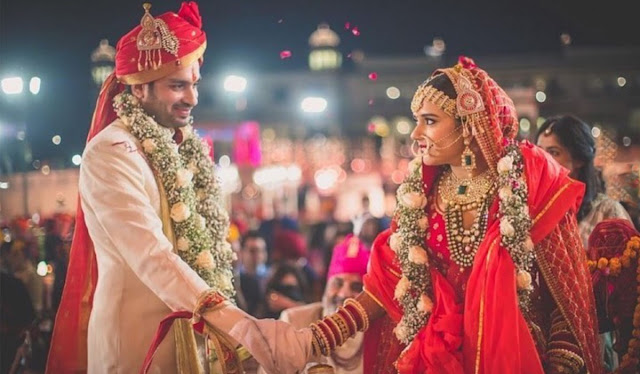 K3G is one of the greatest animators and a masterpiece of all time. The movie is quite gripping and emotional and the title track voiced by Lata Mangeshkar, The Bollywood Nightingale is sure to bring tears of joy to the eyes of all the guests.

Tum Jo Aaye |Once Upon A Time In Mumbai

Nothing can go wrong with that voice of Rahat Fateh Ali Khan and accompanied by the seductive voice of Tulsi Kumar makes this song a must-have on your wedding anniversary song playlist. This song gives off a romantic vibe and can fill the entire environment with a feeling of love.

Featuring the lyrical video for the love song “Tum Jo Aaye” from the Bollywood movie Once Upon a Time in Mumbaai. The film features Ajay Devgn, Emraan Hashmi, Kangana Ranaut, Prachi Desai in the lead roles.

This sultry Meet Brothers song is perfect for young couples’ wedding anniversary and can even make up for a couple’s racy performance. We bet just the imagination of dancing in this dance number with your soulmate will definitely make your skin crawl.

The title of this song gave this generation a perfect line for all young couples. What makes this song even more beautiful is that cheesy shayaris among the lyrics introduced by Prasoon Joshi along with the beautiful voices of Sonu Nigam and Sunidhi Chauhan.

Hold on to love forever. Feel the magic of love with this beautiful track ‘Mere Haath Mein‘ by Fanaa.

The song became very famous in the 90s and was recently reintroduced through that really popular Nescafé ad. From beautiful lyrics to the wonderful voices of Udit Narayan and Sadhana Sargam, this song is a gem in Indian cinema.

This song was an instant hit with the young generation as soon as it was released. Sung by Shekhar Ravjiani, Salim Merchant, and Neeti Mohan, this song can be a great addition to your wedding anniversary song album.

‘Ishq Wala Love‘ from ‘Student Of The Year’ is a soft ballad sung by Neeti Mohan, Shekhar Ravijiani and Salim Merchant. The heartbeat is light and the porridge factor is high. The film is a 2012 Bollywood youth romantic comedy directed by Karan Johar and produced by Hiroo Yash Johar under the banner of Dharma Productions and in collaboration with Shah Rukh Khan’s Red Chillies Entertainment. The film acted as a launching pad for newcomers Sidharth Malhotra, Varun Dhawan, and Alia Bhatt in the lead roles with Rishi Kapoor, Sana Saeed, Ronit Roy, Ram Kapoor, and Farida Jalal in supporting roles.

A song that can be played endlessly in a loop. “Khuda Jaane” was sung by KK and Shilpa Rao, who received many awards and thanks. This song will be an excellent choice for choosing anniversary songs, as it will really help you highlight the love and respect for your better half.

Love is nothing less than a blessing in your life.

Listen to this beautiful song ‘Khuda Jaane’ and revisit the moments you spent with your beloved.

This song is a totally different genre when it comes to other songs on this list. In the photo showing the love of Jodhaa Bai and Emperor Akbar, this song is wonderful and creates a relaxing atmosphere.

Ode of the most beautiful love songs that manages to convey both the joy and the pain of emotion with equal poise. The subtle play of expressions of Akbar (Hritik Roshan) and Jodha (Aishwarya Rai) adds to the feeling it evokes in all hearts. The stolen glances, the half smiles, it all spells romance at its finest.

This song is my personal favorite and it could be yours too, if so let me know in the comment section below. Released in the 70s, but it still creates a feeling of love and admiration and will be a perfect complement to anniversary songs. The song is especially distinguished by a fusion of Afghan and Western music.

Kalyanji Anandji had composed all the songs of Dharmatma. This was his second collaboration with Feroz Khan after Apradh. The film’s music had a fusion of Afghan music and Western music. The songs in the film became top hits.

This song has two variants, one for men and one for women, and both are equally brilliant. Personally, I think a solo dance performance by the wife of the version sung by Sunidhi Chauhan will be a great addition to the anniversary ceremony.

The presentation of the lyrical video of the song “Ishq Sufiyana” is one of the most liked songs of the movie The Dirty Picture. This movie has Emraan Hashmi, Vidya Balan, Naseeruddin Shah, Tusshar Kapoor in the main roles. Enjoy and play only in T-Series.

Probably the oldest on the list, the lyrics to this song from the ’60s are so charming it never gets old. You will surely drown in emotions with this beautiful song in the voice of the singing legend, Lata Mangeshkar.

When it comes to selecting the best anniversary songs, this one can easily be called the “Golden Song”. The soulful voices of Kumar Sanu and Sadhna Sargam are sure to stir the emotions of everyone who listens to this song.

Listen to “Jeena Jeena“, a fascinating romantic song from Badlapur.

When it comes to selecting the best anniversary songs, this one can easily be called the “Golden Song”. The soulful voices of Kumar Sanu and Sadhna Sargam are sure to stir the emotions of everyone who listens to this song.

A moving but happy song is a great composition by Jeet Gannguli and written by the most versatile lyricist Manoj Muntashir. The voices of Arijit Singh and Palak Mucchal make it even more magical. A dance of the couple in this song will be the best to show their chemistry after years of union.

This song was the most successful of the 70s and it definitely deserves that crown. Sung by the dearest Kishore Kumar and Asha Bhosle, this song is so upbeat that it will lift your guests’ spirits like no other.

A delicious presentation of the evergreen duo Kehdoon Tumhe from Akriti and Arnab. Produced by Ajay Singha.

Another attractive song in Atif Aslam’s voice from the movie Rustam. Not only is it visually stunning, but it’s also a must-have on your final playlist for wedding anniversary songs. Manoj Muntashir’s handwriting is a work of art and it sticks at the back of your neck.

This song with beautiful images of Akshay Kumar and Katreena Kaif with some of the most beautiful places in Australia in the background. Equally beautiful is the song with all the beautiful lyrics that expresses love in its purest form.

Watch the official video for the romantic song “Teri Ore” from the Bollywood Blockbuster movie “Singh Is Kinng” featuring the legendary voice of Rahat Fateh Ali Khan and Shreya Ghoshal!

It’s probably the best song for the couple to admire with the help of music. The lyrics are so beautiful that they express one’s feelings like no other. The song itself is so relaxing and captivating that you will find yourself singing as the song plays.

Featuring the full video for the song “Tum Se Hi” from the Bollywood movie “Jab We Met”.

The charisma of this song can be easily understood from the number of remakes that are made of this song originally sung by Arijit Singh. However, the “Raabta – Siyaah Raatein” and “Raabta – Kehte Hain Khuda Ne” variants are equally fascinating.

Ah! Another one of Arijit Singh’s most promising Hindi anniversary songs. This song will be a great option for the husband to hit the dance floor with some solid dance moves. This song is sure to leave your baby totally stunned.

Gulshan Kumar and Prem Vijan present the full video for the song Ik Vaari Aa voiced by Arijit Singh, composed by Pritam and written by Amitabh Bhattacharya from the Bollywood film “Raabta“, a film by Dinesh Vijan and produced by Dinesh Vijan Homi. Adajania Bhushan Kumar Krishan Kumar. The film stars Sushant Singh Rajput and Kriti Sanon in the lead roles with Music by Pritam.

Planning the anniversary ceremony can be tedious, even more so selecting the songs that will go well with the ceremony. Whether it’s 1st or 50th anniversary, I’ve compiled a wedding anniversary song list here, a perfect combination of some of the latest and golden classics, from our very own Bollywood, that should definitely find a place on your playlist.