The best K-pop bands to listen to right now

K-pop is having a moment. The South Korean popular music genre has never been bigger than it is right now, If you’re looking to get into K-pop, we’ve got some recommendations for the best and most talented groups in the game today. 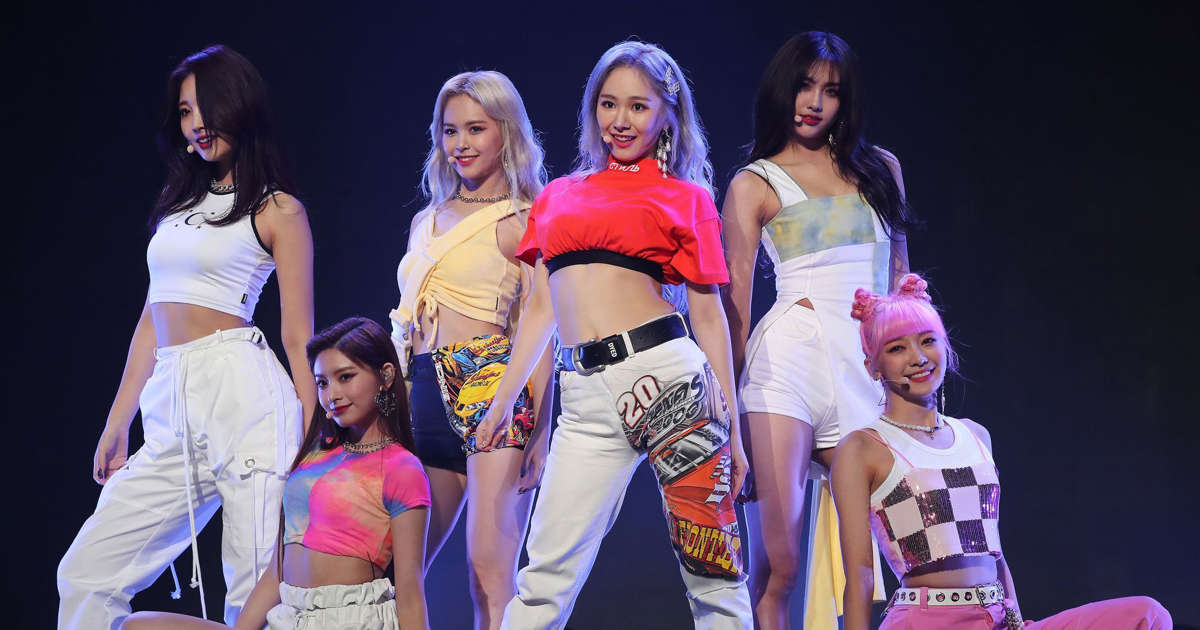 This six-member group has only been around since 2019, but Everglow has made waves in the K-pop world. Their first single album Arrival of Everglow debuted and peaked at No. 6 on the South Korean charts, while lead single “Bon Bon Chocolat” peaked at No. 5 on the World Digital Song Sales chart. . His music video for “Dun Dun,” the lead single from 2020’s Reminiscence mini-album, has a whopping 244 million views and counting.

Exo definitely helped pave the way for groups like BTS to achieve mega stardom around the world. The nine-member South Korean-Chinese group has elements of pop, hip-hop, R&B and electronica, and their first album XOXO in 2013 sold more than a million copies, the first Korean artists to reach that milestone in 12 years. Exo also won five consecutive Album of the Year awards at the Mnet Asian Music Awards from 2013 to 2017.

Momoland was introduced to the K-pop world through the 2016 reality show Finding Momoland, and has since grown into a six-member group, down from the original nine. They have won four Asia Artist Awards since then, most recently in 2021. Momoland was also one of the acts to perform at the 2018 Winter Olympics in Pyeongchang.

Ateez is no stranger to the top of the K-pop charts, as well as the hearts of fans. The eight-member group got their start in 2018, winning the Next Generation Award at the 2019 Golden Disc Awards, and they were also named Worldwide Fans’ Choice at the 2019 and 2020 Mnet Asian Music Awards. Ateez also has four releases that reached No. 1 on the South Korean album charts, and 2020’s Zero: Fever Part.1 EP was their first to be certified platinum.

If you’re looking for a retro vibe to your K-pop with strong vocals, look no further than Mamamoo. They started in 2014 and boast an old-school R&B-influenced K-pop concept with their music and aesthetics, and possess arguably the best and most consistent vocals among their members in the entire genre. Solar, Moonbyul, Wheein, and Hwasa have released solo projects since then, but are still releasing material as a group.

Neo Culture Technology, or NCT, is a literal K-pop factory, complete with various moving parts. There are a whopping 23 members of the group who are divided into four subunits: NCT U, NCT 127, NCT Dream, and WayV. While the four divisions cover different genres, age groups, and regions, it’s when NCT fully comes together that the real magic happens. His three full-length albums, Empathy (2018), Resonance (2020) and Universe (2021), have been huge successes, with two-part Resonance selling over 2.6 million copies, the best-selling physical album for a company. multinational. SM entertainment.

You’ll only need to listen to Twice once to get hooked. The nine-member group first burst onto the K-pop scene in 2015, and their debut EP The Story Begins became the year’s best-selling Korean girl group album. Twice is also the first Korean female act to simultaneously top Billboard’s World Digital Song and World Album sales charts, achieving this feat with their first studio album Twicetagram and its lead single “Likey” in 2017. Their choreography of distinctive points is a big part of his popularity, incorporating modern online culture into his music and videos.

We will give you an idea of how many members there are in Got7. Jay B, Mark, Jackson, Jinyoung, Youngjae, BamBam and Yugyeom got off to a promising start in 2014, with their first EP Got It? reaching No. 1 on Billboard’s World Albums chart. Got7’s live performances are also must-see events, featuring street dance elements and martial arts tricks.

Red Velvet hit the scene in 2014 with a two-pronged approach: the “Red” side is mostly pop with electronic, funk, and hip-hop elements, while the “Velvet” side showcases an R&B and jazz sound. Irene, Seulgi, Wendy, Joy, and Yeri are hookup machines, and their versatility and gender-bending style has earned them a huge following: they have 11 chart-topping albums and are one of the most chart-topping K-pop artists. streams on Spotify.

iKon was the result of the survival reality show Mix & Match, debuting in 2015 following that competition. Their first album, Welcome Back, reached No. 1 on the South Korean Albums Chart, with three No. 1 singles and three top 10 singles, selling over 4.8 million copies. His second album Return in 2018 was also a huge success, topping the digital chart in his home country for a record six weeks.

Girls’ Generation are essentially K-pop royalty, and they’ve been going strong since they started in 2007. Earning the nickname “The Nation’s Girl Group” in their home country, the band saw their second studio album Oh! winning the Gold Disc award for Album of the Year in 2010, the first and only female act to achieve this feat. In 2013, the electropop/bubblegum pop group won Video of the Year at the opening of the 2013 YouTube Music Awards for “I Got a Boy,” and was the first Asian girl group to boast five music videos with more than 100 million views on YouTube.

Monsta X is as intense as K-pop. The six-member group debuted in 2015 and quickly became known for their aggressive style, adding elements of hip-hop and strong EDM to their sound, which fans call “loud music.” Shownu, Minhyuk, Kihyun, Hyungwon, Joohoney, and I.M have achieved worldwide success; her first English album, 2020’s All About Luv, was ranked #5 on the US Billboard 200 and #7 on the US Rolling Stone Top 200.

Itzy has come a long way since bursting onto the scene in 2019. The five-member group (Yeji, Lia, Ryujin, Chaeryeong, and Yuna) won New Artist awards at four major award shows, becoming the first K-pop girl group. . to win a “Rookie Grand Slam”. On the strength of the lead single “Loco,” Itzy’s first album, 2021’s Crazy in Love, debuted at No. 11 on the Billboard 200.

Supergroups also exist in K-pop, and one such group is the aptly named SuperM. The seven members is made up of members from four different groups, all under the SM Entertainment label. Their self-titled EP debuted in 2019 at No. 1 on the US Billboard 200, making SuperM the first Asian artist in history to top the chart with their first release.

True fans know that G is silent and is pronounced “Idle,” but (G)I-dle is more than just a seemingly confusing name. The girl group self-produces and writes their own music, which is a rarity in K-pop. Originally a six-member group, (G)I-dle now consists of five members after Soojin left in August 2021, leaving behind Miyeon, Minnie, Soyeon, Yuqi, and Shuhua. Their 2020 EP I Trusts et an iTunes Top Albums chart record for a South Korean girl group, and they are considered one of the most successful groups outside of the “big three” K-pop record labels.

Enhypen has achieved a lot in a very short time. All seven members came together as finalists of the 2020 survival competition show I-Land and have won various awards for best new artist. His 2021 album Dimension: Dilemma sold 1.2 million copies worldwide and became the 9th best-selling album of the year in South Korea.

Loona’s origin story is quite unique. Starting in 2016, Blockberry Creative spent 18 months revealing the members of the now 12-member girl group, releasing songs and albums with other members as they went. Loona has four EPs plus a ton of hit singles, and in 2021 they were named overseas ambassadors of Korean culture by the South Korean Ministry of Culture, Sports, and Tourism.

No, there aren’t 17 members of Seventeen, but it’s pretty close. The K-pop boy group has 13 members who are divided into three specialized units: “Hip-Hop Team”, “Vocal Team” and “Performance Team”, so you know they are complete. Debuting in 2015, their EP 17 Carat was the longest running K-pop album of the year in the US, with all members actively involved in songwriting, choreography, and musical performances.

Blackpink has done as much as any K-pop act in history to drive the global popularity of the genre. Jisoo, Jennie, Rosé, and Lisa first came into the public eye in 2016, and have since become the first Korean female music group and act to have five music videos with one billion views each on YouTube, as well as the girl group with the most followers. on Spotify. In 2021, South Korean President Moon Jae-in personally praised Blackpink for helping to spread K-pop, calling them a “global K-pop phenomenon”.

Even if you’re a complete newbie to the K-pop genre, there’s a good chance you’re familiar with BTS. Whether you call them Bangtan Sonyeondan, Bangtan Boys or Beyond the Scene, the Grammy-nominated hip-hop-influenced group has set the world on fire since their debut in 2013. They co-wrote and produced most of their own material, RM, Jin , Suga , J-Hope, Jimin, V and Jungkook are the best-selling artists in South Korean history and are the first South Korean act to reach No. 1 on the Billboard Global 200 and U.S. BillboardHot 100. In 2020, “Dynamite ”, “Savage Love”, “Life Goes On”, “Butter” and “Permission to Dance” reached No. 1 in the US, the fastest to achieve that feat since Michael Jackson.

If you’re looking to get into K-pop, we’ve got some recommendations for the best and most talented groups in the game today.